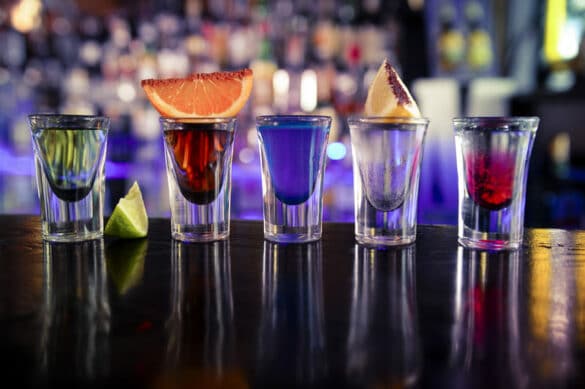 Have you ever been so drunk just after having a few shots? It is not your drinking capacity, but the shot glass that might’ve made you drunk! Be mindful of your alcohol intake because shot glasses are not the same size.

Shot glasses differ from one country to the other. They are typically 1.5 ounces in size, but this is not conventional. They may range anything from 0.5 ounces to 3 ounces. Yes, 3 ounces can be just a shot!

Different types of glasses can be used to serve various alcoholic beverages. For serving beer, there are pint glasses or mugs, wine for wine glasses (which again come in a wide variety), whiskey in rocks glasses, champagne in champagne glasses, and vodka in shot glasses.

These glasses come in a wide range of sizes and shapes, so if you want to drink vodka and tequila, use a shot glass to help you stay below your alcohol limit.

Check out more information about the shot glass sizes, so you can make the most of happy hour the next time you’re at the bar!

What Is A Shot Glass?

Shot glasses are drinkware for small drinks that need to be gulped down at once. They come in a variety of forms and sizes, as well as of different materials. The general size of the shot glass can contain 1.5 ounces and has a substantial base. This is made because people smack the glasses on the table after gulping down their shots as it tastes bitter.

How Many Ounces Are In A Shot Glass?

Shot glasses are small-drink serving glasses used in bars. However, the specifics of that small quantity will vary depending on where you are. While not always, most of them calculate a shot glass to contain 1.5 ounces.

These are the sizes for a single shot. The sizes of double shots can be much larger, up to 3 ounces.

How Much Is A Shot Glass?

Shot glasses are small-sized glasses to serve hard drinks. These drinks cannot be consumed in a high volume and should be gulped in one go. Nevertheless, they are served in shot glasses with sturdy bases.

Depending on where you are, a shot glass may hold 1.5 ounces (or 45 milliliters), which varies. It can range in size from 20 milliliters to 100 milliliters.

How Many Ounces In A Shot Of Vodka?

Although not mandated by law, a single shot of vodka typically holds 1.5 ounces. There are occasions when the drink may be lighter and hence have less vodka in it. Whereas some may be heavier than 1 or 1.5 ounces which makes it a double shot. This drink’s 1.5-ounce serving size contains roughly 40% alcohol by volume (ABV).

How Many Ounces In A Shot Of Tequila?

How Many Ounces In A Shot Of Whiskey?

A shot is a single serving of liquor that is guzzled down. For a typical drink, a shot glass holds 1.5 ounces, but for whiskey, it can hold up to 5 ounces. It can be up to 2 ounces with a neat shot, which is without dilution. Whiskeys have a greater alcohol content and get you a high after a few shots.

In most venues, such as bars or pubs, shots are typically taken from these glasses. They are ideal for gulping down your tiny drink because they typically hold a measurement of 1 to 1.5 ounces. All these shot glasses have a strong base that prevents the shattering of glasses.

The name says it all! Cheater glasses are those glasses that look like a normal shot glass until you pour your drink. Once the drink is poured, you’ll see that it has a smaller capacity than a standard shot glass.

This generally holds up to an ounce of the alcoholic beverage and hence you can call for more shots!

A fluted glass, which resembles the other shot glasses, is much fancier. This glass is of excellent quality and features a fluted or wrinkled base. It holds the same volume of liquor that any standard shot glass holds. It is often used for a fancier and supreme drink, which is whiskey, because of its fancier look.

Also called ‘shooter’, this is a shot glass that is tall and tapered. These are similar to the cheater shot glasses that provide the impression that more alcohol is being consumed. However, it measures the same volume of 1.5 ounces as that of a standard shot glass.

Perfect for newbies, this is a slightly smaller shot glass. Pony refers to a small horse and hence the name for this glass. This glass is identical to the standard glass except that it is slightly smaller and can only accommodate 1 ounce of your drink.

Although a small glass, it could have a lot in it. Be it your first drink or the last cheers at the end of a party, shots are a part of any party! Drinking is fun but make sure to keep a check on how much you drink.

I hope this article illuminated you about the volume of drink in your shots and much more. Keep this in your mind the next time you are at a bar and drink responsibly.

How many ML in a shot glass?

How many tablespoons are in a shot?

A shot glass, as you know by now, is 1.5 ounces which are around 45 milliliters of your drink. When measuring the same using a tablespoon, it will be 3 tablespoons for a single shot.

If the shot glass varies in size, then the number of tablespoons constituting a shot will also vary accordingly. If you measure using a teaspoon, the number of teaspoons used will increase as they are smaller in size and you will need 9 teaspoons to make a shot.

How to measure without a shot glass?

You want to have some shots one evening, but realize you don’t have a shot glass. You can still have the same volume of alcohol as shots using other measures without being overly intoxicated.

Spoons are found in everyone’s place and hence is the easiest thing to measure your shots. But be sure to use it properly as you will not know the correct measurements of alcohol, which can be toxic if consumed more.

Use 3 tablespoons or 9 teaspoons of your drink to make a shot. Although it may not give you that party vibe, you can use it to measure your drink to stay within your limit.

Medicine cups are really handy when it comes to measuring your shots. They have measurements in milliliters on the side that can help you measure your drink.

A single shot can approximately be 30 to 45 milliliters and hence medicine cups can be of some help when measuring shots to drink sensibly.

Jigger is something that bartenders use to measure your drink. It is a piece of small measuring equipment used in bars that is usually 1 to 2 ounces in size. It is generally used to mix your drinks like a cocktail.

This is another trick that bartenders use to measure your shots without the shot glass. It is a simple method where you count up to four while pouring the drink, which will be one shot. It can sound quite tricky in the beginning, but it just gets easy as you practice.