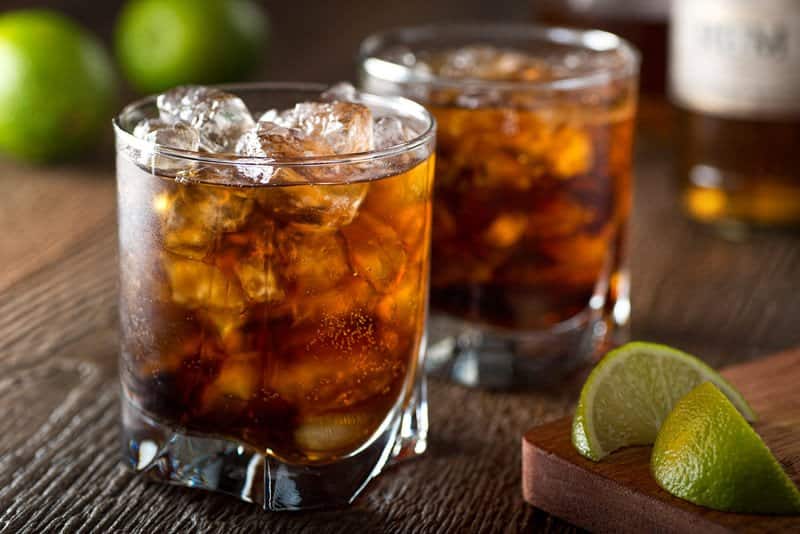 If you never had rum, know that most people either love it or hate it. There is not much gray space in between since this is one of the richest alcoholic drinks, in terms of flavor.

We can classify rum as one of the sweet alcoholic drinks. But different types of rum will also have an earthly taste or even a grassy taste. Keep reading to find out everything you want to learn about the taste of rum!

What is the flavor in rum?

Since rum comes from distilled sugar, the main flavor in it will be that of processed sugar. Depending on the level of sugar in the rum, the drink could also have a flavor of toasted sugar or caramel.

The taste of rum will differ according to the ingredients used but also the way it is made. Both the fermenting and distillation processes will have an impact over the taste of rum.

As a general rule, light rum, also known as white rum, will have a more neutral taste compared to regular rum that was let to age. So, if you are not a fan of strong drinks or you are not so keen on the taste of original rum, light rum might actually be a great option for you.

As we mentioned, there are different varieties of rum and the taste will differ as well. Therefore, don’t rush to conclude you don’t like rum if you only had one kind of it. Chances are that other versions of this popular drink might appeal you better!

For many people rum is just one drink, somewhat sweet and brownish in color. But depending on the way it was made, this famous alcoholic beverage can be a result of various recipes.

Almost each part of the world developed their type of rum. However, most of the following varieties can be found in supermarkets worldwide.

Gold rum is also known as pale rum and its sweet vanilla taste make it very popular. You can enjoy this rum plain, with a few ice cubes, or add it in your favorite cocktail.

It is the type of rum that is suitable for beginners as well as experts in terms of rum varieties. Plus, its amber shade is very inviting as it looks great in any type of drink! Some producers don’t get the amber shade of gold rum from the distillation process but they add caramel to it.

White rum or light rum is the perfect ingredient in mild cocktails since it has a more discrete taste and a clear color. The flavor of this rum is similar to a sweetened type of vodka and it is distilled for about one year. If you want to prepare the famous mojito cocktail, white rum is definitely a suitable ingredient!

The Columbian rum, Aguardiente, is a charm from the first sip! The sweet anise flavor makes this rum different from other varieties and easy to identify. You will also notice a veggies and peppery smell to it that completes the sweet taste of the drink in a very interesting way.

Rhum Agricole comes straight from the heart of the Caribbean and it has a sweet taste thanks to the sugarcane juice. The veggie scent makes this rum very interesting and gives you a unique experience every time you drink it. It is an ideal ingredient in Caribbean cocktails as well.

If you are looking for an intense type of rum, the black rum is exactly what you need. With its rich taste and dark color, this rum will give you a complete experience even if you drink it plain. Its flavor is both sweet and spicey and it is often used as an ingredient in cakes.

The traditional Jamaican rum is made of molasses, following the original recipe. The smoky and woody profile of this rum also has a tropical taste to it. So, if you are looking for the best rum to complete your summer cocktail, this should definitely be an option.

Dark rum will offer you a sweet chocolate and caramel flavor but also a bit of dried fruits. It is aged anywhere from three to five years, depending on the producer. The more this rum is aged, the more intense its flavor is. The smoky profile makes it a great experience by itself or as an ingredient in strong cocktails!

Overproof rum is high in alcohol content which makes it mild in terms of flavor. If you want an alcoholic boost in your drink, this is the ideal type of wine.

It is more distilled than other varieties and due to its high alcohol content, it will leave a burning taste in the mouth. If the flavoring of this rum was generous, you will notice a pineapple, banana or pear taste to it.

This type of rum is less popular than other types but it is still a great option if you need a high alcoholic ingredient for your drink. It is fairly easy to find in stores and you only need to use a bit of it to boost your cocktail.

Spiced rum or flavored rum it’s a type of rum with low alcohol level that comes in a stronger taste. You will find this rum with an ABV of less than 40% and in flavors such as citrus, orange, mango or coconut. It can be very tasty and a good choice for mild, fruity cocktails.

Spiced rum is considered the tastiest rum, even if it doesn’t bring such an intense alcohol boost. If you choose a spiced rum with a coconut flavor, you will find it very suitable for tropical cocktails. At the same time, a citrus or orange rum will give you a refreshing drink that you will love to enjoy with your friends and loved ones.

The last but not the least type of rum is the premium rum. This rum is aged more than other varieties which gives it a more intense taste and scent.

Many people compare premium rum with whiskey in terms of the intensity of the profile. You can find this rum with flavors of cinnamon, vanilla as well as dried fruits.

Premium rum tends to be pricier than other types of rum. The higher price is due to the time it takes to age this alcoholic beverage but also the different flavors it comes with.

However, once you give it a try, you might discover that it is your favorite type of rum and it will be difficult to settle for another version of this drink!

The smell of rum is quite difficult to define. The variety of rum will also have an important impact on the way the drink smells.

The general description of rum’s scent is fruity, sugary, smoky, alcoholic and somewhat glue-like. The Ethyl propanoate gives rum a fruity aroma, mixed with the one of caramel. At the same time, the ethyl isobutyrate brings a butterscotch aroma to rum that completes its scent profile.

However, when mixed with other ingredients, such as in different cocktails, the rum scent will be diminished and less intense. This is particularly the case when you mix rum with other aromatic drinks.

Is rum stronger than vodka?

Rum comes in an alcohol content that can vary from 5% to 80%, depending on the type of rum you have. At the same time, vodka has an ABV of generally 40% to 50%. Vodka however, has a neutral flavor so it will not alter much the taste of your drink while it will give it an alcohol boost.

If you choose to use distilled rum such as white rum, this has an ABV of 40%, which is similar to vodka. The general rule says that the richer the flavor of the rum is, the less alcohol it contains.

The taste of rum is quite different from the taste of vodka. Even so, white or light rum can be compared to vodka in terms of flavor. This type of rum has a high alcohol content compared to other types and a mild, almost discrete flavor.

Many consider white rum to taste somewhat like sweet vodka. But other types of rum come in flavors of fruits, caramel, vanilla and they are quite different from the blunt, flavorless, vodka.

Is rum sweeter than whiskey?

Many times, rum is compared to whiskey and there are several resemblances as well as several differences between these two very popular drinks. The malt whiskey tends to be stronger in both taste and sweetness but rum is still considered to be sweeter than whiskey.

Spiced rum in particular, comes with a distinguish sweet flavor that will overtake the one of whiskey in any type of mixed drink. Unlike rum which has a defined flavor, whiskey was initially used to enhance the taste of other ingredients in a cocktail.

Although nowadays, people enjoy both rum and whiskey plain or with some ice cubes, these drinks are best used in combinations of different cocktails. They add just the right amount of flavor and alcohol to create the taste profile that any cocktail lover will appreciate.

Besides its higher sweetness level, rum tends to be more popular than whiskey because it comes at a more affordable price as well. The cost of production is higher for whiskey, making its shelf price significantly higher as well.

Both rum and whiskey are fermented, processed, distilled and aged drinks, even if the time of these factors differ. They both come in different varieties and with different flavors, so you can choose the one that suits your preferences best. Also, rum and whiskey are equally used as mixes in cocktails of all kinds and they are equally appreciated.

Even if rum is sweeter than whiskey, it is not necessarily stronger. The average rum has an ABV of 40% while whiskey can come with an alcohol content of 40% to 60%. so, if you want a sweeter and at times richer in flavor drink, rum might be a better choice for you.

Rum is one of the most popular alcoholic drinks all over the world. It comes in many varieties and almost every culture developed its own recipe along the history.

People enjoy this beverage plain, with ice cubes or as an important ingredient in complex cocktails. If you want to taste rum, it is ideal to start with a type that has a low alcohol content and a stronger flavor.

Once you get familiar with the rich flavor of rum, you will be able to find different ways to integrate this drink into your cocktails and you will make the most out of it!

Can you Mix Vodka and Rum?(All you Need to Know)