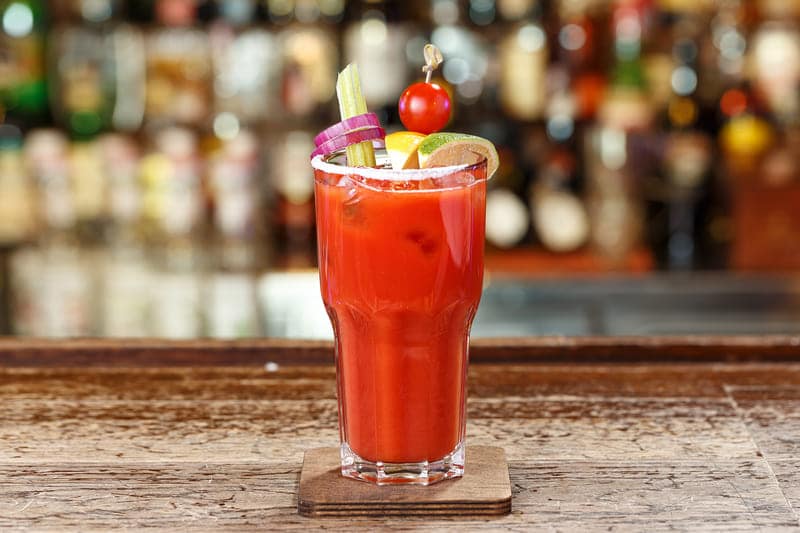 They’re both delicious and refreshing cocktails. In fact, they’re the best-known hangover drinks made with similar ingredients. However, they have different flavors.

Some people think they are the same drink because of the similar names and the same ingredients used for their preparation, but that is not the case.

Why and how they’re different, I’m going to reveal to you in this article.

So, if you are interested, read on to learn. And if you are not, read it anyway as you will learn something new and exciting to talk about with your friends.

Let’s begin with our cocktails.

The Bloody Mary is a delicious cocktail first made in 1921.

The original ingredients of this cocktail were vodka and tomato juice. Later other things were added, such as hot sauce, Worcestershire sauce, pickled vegetables, olives, black pepper, salt, lime or lemon juice, celery, and celery salt.

There are many variations of Bloody Mary with added or taken-off ingredients from the original recipe.

A non-alcoholic variation of Bloody Mary, also known as Virgin Mary, is made with extra tomato juice instead of spirit.

Bloody Mary is a cocktail you can serve on the rocks in a tall or any type of glass with or without added alcohol at brunches.

You can make Bloody Mary at home with fresh ripe tomatoes or tomato juice and adjust the ingredients to your taste to get the best version of this cocktail.

That way, you will feel the refreshing flavor of Bloody Mary. 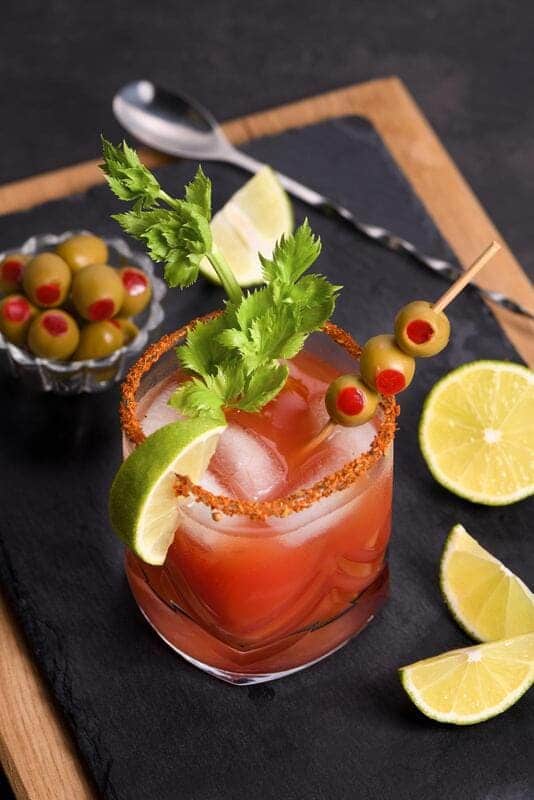 Bloody Caesar is the Canadian variation of Bloody Mary.

It was first made in 1969 in Calgary-Canada with a blend of tomato juice and clam juice, also known as Clamato juice. Other ingredients in Bloody Caesar include vodka, hot sauce, Worcestershire sauce, salt, and pepper.

Like Bloody Mary, Bloody Caesar has variations made with other ingredients like horseradish, Tabasco sauce, tequila, rum, gin, and beer. There is also an alcohol-free variation of Bloody Caesar known as VirginCaesar.

You can adjust the type of the ingredients and their amounts if you prepare Bloody Caesar by yourself. You can use other hot sauces instead of Tabasco sauce or garnish like dill pickle spear.

If you don’t like the clam juice flavor, you can use more tomato juice to get the desired taste that will work best for you.

Caesar is a national cocktail of Canada; Caesars National Day is celebrated every year in the middle of May.

Now, let’s learn more about the differences between these two popular cocktails.

At first, bloody Mary and Bloody Caesar look like they are the same cocktail. However, they’re not the same; they’re just similar.

The first difference between Bloody Mary and Bloody Caesar is in the ingredients used for their preparation.

One of the main ingredients besides vodka or another type of spirit in Bloody Marys is tomato juice. Therefore, it has a thicker consistency and stronger tomato juice flavor.

Bloody Caesars, on the other hand, consists of clamato juice. This juice is a mixture of tomato and clam juice which gives the Bloody Caesar a specific flavor.

You will taste the second difference when you take just one sip from the cocktails and feel that refreshing flavor in your mouth.

From the first sip of the Bloody Mary, you will first taste the tomato flavor mixed with the vodka’s silky flavor, the hot sauce’s spicy flavor, and the smoky flavor of the Worcestershire sauce, acidic from the lemon juice, and salty flavor. All these flavors will explode in your mouth, leaving you with a refreshing taste that will linger in your mouth, asking for another sip.

The first sip of the Bloody Caesar is different than the one of Bloody Mary because of the clamato juice. You will taste salty, sweet, and spicy flavors embraced by the fresh flavor of the ocean and tomato flavor that clamato juice provides.

So, Which One is Better?

They’re both delicious and refreshing cocktails; try them and choose the one you like the most. Honestly, I can’t choose just one, and I usually end up with both.

They’re both good in their own way, so it only depends on your taste which one you’re going to choose.

Therefore, the next time you host a brunch or a party, you can make both cocktails and serve them to your guests to find out who’s team Bloody Mary and who’s on the Bloody Caesar team.

You can garnish the cocktails with celery, olives, bacon, dill pickles, pepperoni sticks, salami, pickled green beans, or any other garnish you like.

What Food Goes Well With These Cocktails?

These cocktails pair well with different types of food.

The only important thing is to serve food that will go well with the flavors of these fantastic and delicious cocktails and enjoy every sip and bite. Because that is what the cocktails are made for –enjoying.

Do Canadians Call A Bloody Mary A Caesar?

Caesar is a variation of Bloody Mary and a popular drink in Canada.

Canadians call a Bloody Mary – Bloody Mary, not a Caesar because they’re proud of their national cocktail and usually say it is a better cocktail than Bloody Mary.

Both cocktails contain tomato juice, but the key difference is the ingredient that gives a distinctive flavor to the Caesar cocktail-Clamato.

Clamato is a mixture of tomato and clam juice and has a more robust flavor, so Caesar is made with fewer ingredients to let the flavor of the Clamato shine over the rest of the flavors in the cocktail.

Why Is A Bloody Mary Called A Caesar?

Bloody Mary is called a Caesar because they share a similar ingredient: tomato juice.

However, they don’t have the same flavor because of the Clamato juice used to make Caesar. In comparison, Bloody Mary is made only with tomato juice and vodka.

What’s The Difference Between Clamato And Bloody Mary?

The difference between Clamato and Bloody Mary is that Clamato is a mixture of tomato and clam juice. In contrast, Bloody Mary is a cocktail, and one of the main ingredients is tomato juice.

Clamato contains added salt and sugar and is flavored with spices. It is used on its own but is also added to many different alcoholic beverages.

One of the cocktails in which Clamato is used is the Canadian version of Bloody Mary, which is Bloody Caesar.

Clamato is mainly consumed in Canada, USA, and Mexico.

Why Is It Called A Caesar In Canada?

The  Canadian variation of Bloody Mary is called Caesar. It is a national cocktail first made by Walter Chell in 1969 in Calgary.

This first version of Caesar was made with clam nectar, vodka, tomato juice, Worchestershire sauce, celery salt, and a secret ingredient, a dash of oregano.

Walter named the cocktail Caesar, but when one English man tried this cocktail, he was surprised at how good it was and said it was a damn good bloody Caesar.

Therefore, Walter thought that was a better name for his cocktail, and he called it Bloody Caesar. And from then that is one of the most consumed cocktails in Canada. Annually, Canadians are drinking over 400 million Caesars.

There are various recipes for Caesar made and garnished with different ingredients. But this is my favorite recipe for Caesar, and I hope you will like it and become your favorite Caesar recipe too.

Take a slice of lemon and wet the edge of the glass from the inside with lemon juice. Rim the glass with celery salt and fill it up with ice.

Add all the ingredients to the glass. Mix all well and garnish with a  lime wedge and celery stalk. Serve and enjoy.

I hope I have helped you decide which cocktail to serve at your party and enjoy it with your loved ones.

Bloody Mary and Bloody Caesar are both delicious and refreshing; it is only up to your taste which one you choose.

If you can’t decide like me, make them both and step up your drinking game.